Hairlossable is reader-supported. When you buy through links on our site, we may earn an affiliate commission. Learn more 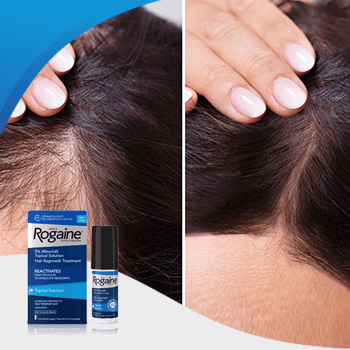 * Only visible on admin mode.

There are 100s of well-documented success stories from both men and women, about how Minoxidil 2% (for women) and 5% (for men), have helped them regain lost hair and of course, confidence.

However, our only concern is the price tag. The Rogaine unscented foam costs about $40 while the Rogaine solution is close to $53.

The treatment takes about 3 – 6 months, and in some cases up to a year to show visible positive results, and this can quickly burn a hole in your pocket. 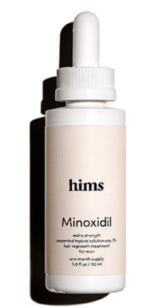 Among the seven products we tested, our highest recommendation goes to Minoxidil topical solution by hims. Their solution contains 5% of minoxidil just like Rogaine, and it’s unscented as well.

The downside is that their product is only available for men as of now. Women will still have to go with the higher priced Rogaine. 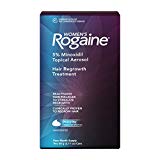 Rogaine for Women is also proven to increase hair regrowth by up to 25 percent.

This product is the female version of the same unscented foam as mentioned above.

Women who use this product have seen thicker, beautiful, natural hair regrowth by targeting and reactivating hair follicles.

Approximately 81 percent of women have seen hair regrowth from using this product.

Rogaine for Women is easy to use and. This package of Women’s Rogaine Foam includes one 60-gram bottle of foam, which is approximately a two-month supply.

Women’s Rogaine Unscented Foam can be purchased online via the official Rogaine website for $39.59.

Approximately 40 percent of women aged between 18 and 45 years who have used this product have seen moderate hair growth after eight months of daily use.

Women’s Rogaine Topical Solution is available as both a one-time purchase for $52.79 and as a subscription program via the official Rogaine website.

Individuals can purchase two-month to 12-month supply at a reduced rate.

Does Generic Minoxidil Provide The Same Results As Rogaine?

Truth be told, there isn’t much difference between Rogaine and other generic brands, as the central ingredients in all of them is Minoxidil and the concentrate is same (5%).

Yes, the generic brands may contain additional ingredients which can possibly alter the consistency, however the difference will still be negligible.

It is possible, for example, that Rogaine or Kirkland Signature may work better for your scalp and hims may work well for others.

Likewise, there are users of Kirkland Signature who have complaint of rapid heartbeat, tingling on the face, etc.

It entirely depends on your preference.

So, What Is Minoxidil?

Minoxidil is a generic medication, available over-the-counter to treat androgenic alopecia, also known as male/ female pattern baldness, a form of hair loss that affects the top and front of the scalp.

This may come as surprise, but Minoxidil was originally developed in the 1950s to cure Ulcers.

Though unsuccessful, researchers kept investigating the compound, and eventually, in 1979, FDA approved Minoxidil as an oral tablet to treat high blood pressure.

It was at the University of Colorado, when associate professor Charles A. Chidsey MD. was studying the effects of Minoxidil on Hypertension, that he stumbled upon its effect on hair loss.

Between 1980 – 1988, more researchers joined the race, testing different concentrates of the compounds, such as 1% and 2%, and finally in 1988, the FDA approved the drug to treat male pattern baldness.

The drug was released under the name ‘Rogaine’.

Studies conducted at that time noticed that using Minoxidil, over 39% of men “had moderate to dense hair growth on the crown of the head”.

In 1991, a new formula was developed and released for women.

Initially, both products were available as prescription-only, but in 1996, the FDA cleared the over-the-counter sale of the drugs.

In 1998, FDA approved a 5% formula for the non-prescription sale of the drug.

Yes, but temporarily. Minoxidil is known to recreate the anagen phase of hair growth, which is why some people experience unusual hair shedding.

When you first start using Minoxidil (Rogaine or hims), it stimulates on a follicular level, encouraging regrowth.

This process causes temporary hair fall. It’s simply your old hair falling, giving you the impression that you are losing more hair than normal.

This phase of hair regrowth lasts for up to 4 weeks. As ironic as it sounds, it’s a sign that the treatment is working for you.

Will a Higher Concentration Increase Results?

It is important to know that the FDA has only approved the 2% and 5% solutions. It’s for a good reason.

Will a 10% or 15% solution expedite the results? Yes, it may, but it also carries with it some side-effects.

A 48-week clinical trial conducted on 381 women in 2004 clearly showed that, while the 5% was more effective, it did cause side effects such as itching, burning, and some serious ones such as dizziness and low blood pressure.

It is worth mentioning that no real tests have been conducted on higher doses.

What Is The Success Rate For Hair Regrowth With Rogaine?

In 2012, a one-year observational study was conducted on 984 men in Germany.

Twice a day, the patients applied about 1 ml of Minoxidil solution to their scalps.

Physicians evaluated their hair loss level at the beginning and end of the study. The study revealed a –

Similarly, a study conducted on women over a period of 8 months showed that 19% of them experienced moderate growth while about 40% of the women had minimal growth.

The above numbers prove that Minoxidil does help in reducing hair fall and encourages hair growth on a scalp level.

What Are Some Side Effects From Using Rogaine?

The side-effects exist, but they are minimal and mostly temporary. Here is a short list –

There have been reports of loss of libido in men, but so far, no clinical studies have confirmed the same.

The causes of hair loss have been studied by physicians, dermatologists, and scientific researchers for years.

Through the years, hair loss experts and dermatologists have determined that most men and women who suffer from hair loss do not realize hair is thinning until approximately 50 percent of hair has fallen out.

As a result, hair loss treatment should begin earlier in life rather than later to combat male pattern baldness.

Hair loss is caused by many different things, with the most common being stress, illness, aging, a vitamin or mineral deficiency or lack of sleep, hereditary hair loss as well as several other conditions.

Hair loss can even be caused by genetics! In fact, some things we do every day in our daily routines can lead to hair loss!

Stress and Anxiety – Stress is one of the most common causes of hair loss. What most people don’t realize is that the stress response that causes hair loss is rooted beneath the skin’s surface.

Furthermore, evidence from numerous clinical studies shows that increased stress levels have been known to play a role in the onset of various skin diseases.

For example, the most common causes of hormonal changes in women are due to childbirth and menopause.

However, like men, women also suffer from hair loss due to aging.

Patchy Hair Loss – Patchy hair loss, also known as male pattern baldness is a medical condition that is medically and scientifically referred to as Alopecia or Androgenetic alopecia.

Alopecia is a condition that that is rooted in the hair follicles.

In fact, alopecia and similar conditions affect 2 percent of Americans, roughly 6.5 million men and women suffer from it.

Scalp Infections – As mentioned above, one of the common causes of hair loss that is often misconstrued is a skin condition.

Scalp infections can include itchy patches on the scalp and can also be extremely painful. The good news is that once the infection is treated, the hair growth process is restored.

Some birth control medications can also cause hair loss, again due to hormonal changes.

Radiation therapy used to treat, and cure cancer can also cause severe—and sometimes permanent—hair loss, which may be irreversible.

The only symptom they notice is significant hair loss or thinning hair.

Iron deficiencies can cause hair to become dull, dry, and damaged, and nails can also become dry, brittle, and break easily.

Individuals who notice thinning hair or hair loss, or stunted hair growth and strength should consider trying supplements for hair growth that are also high in iron.

Certain Hairstyles and Treatments – Although we have explored several serious conditions, infections, and various treatment methods that could impact the hair growth cycle and result in temporary and even permanent loss, sometimes hair loss is caused simply by going through our daily beauty routines.

For example, aggressive hairstyling, such as excessive brushing or pulling hair too tight can result in thinning hair, damaged hair, etc.

Additionally, certain treatments, such as hot oil treatments, permanent color treatments, and even perms can cause inflammation of the hair follicles, resulting in hair loss.

At Hairlossable, we primarily recommend all natural and organic products such as Shapiro MD to reduce hair fall and regrow hair.

However, we understand that some of our readers want a chemical-based, FDA approved solution to combat their hair loss problems. As such, Minoxidil gets our highest recommendation.

While you can try the popular Rogaine program for a year, it will easily set you back by many hundred dollars. We highly recommend the Minoxidil solution from hims brand. At $15 for a month’s supply, it is a killer deal.

Disclaimer: The information contained within this site is not intended as a substitute for professional medical advice. If you have, expect to have, or suspect you may have any medical condition, you are urged to consult with a health care provider. These statements have not been evaluated by the Food and Drug Administration.

These products are not intended to diagnose, treat, cure, or prevent any diseases or medical conditions. Results are based on Hairlossable.com Ranking System and do not necessarily reflect typical results from the use of these products. Please visit product websites for more information.

FTC Disclosure: We represent a professional research and review team, and on our page you may find affiliate links for which we could be compensated for by clicking on them. https://hairlossable.com is a participant in the Amazon Services LLC Associates Program an affiliate advertising program designed to provide a means for sites to earn advertising fees by advertising and linking to amazon.com.

All logos and names are respective to each company and brand, all registered trademarks and protected images are used under the terms of 'fair use'. Please reach out, we're human too.

has been added successfully to your wishlist.